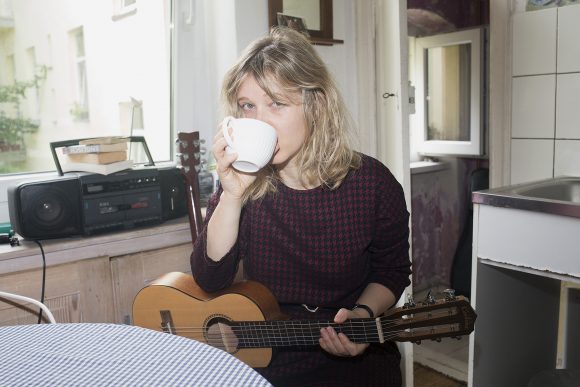 My studio is my kitchen.

What I do in one sentence: Writings songs, singing and playing guitar, releasing and promoting records, organising concerts at the Lofi-Lounge at Schokoladen Mitte and hosting a radio show (Solaris Empire Lounge) at Alex Radio Berlin.

Why I didn’t get a proper job: I’m a nightingale.

An artwork I dream of and I would get accomplished if space, time and money were abundant: Learning to produce music on the computer and producing a record on my own.

Artists, I have on my watch list (and why): Here are some of my Berlin favourites, the city hosts a lot of good musicians, worth to listen! Last days Of Elvis, they play at the Lofi-Lounge at Schokoladen on the 17th of January 2018, super shoegaze sound from Glasgow. Brandon Miller: My favourite American Berlin musician, great voice. Case van Duzer: I love her songs and her voice, it’s very touching.

I am afraid of sickness, poverty, lonelyness.

How I want to be buried resp. words I want to be written on my tombstone: I don’t wanna think about that now.